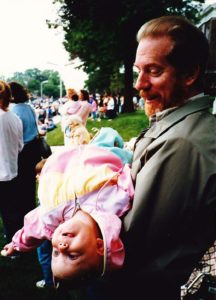 One year old. Upside down with Dad. My favorite pastime at the time.

Someone posed the question to me – if you allowed yourself to be a “Bad Girl” what would you do?
I had to think on it. What does being bad even mean?  It made me think of being a child. Uncensored. When total unbounded exploration was the name of the game:
———————————-

If I were bad girl. If I were free. I want only to…be free. Which I guess requires being a bad girl. A going against. If I were a bad girl I would chop off all my hair and walk around barefoot and lick my toes even if they were covered in dirt, just out of curiosity. I wouldn’t take a moment to question. I’d go go go. I wouldn’t censor and edit this as I’m writing it. I’d sit on random people’s laps and wrap my arms around them and tell them I loved them. I’d express how good it feels just to press bodies together, non sexually, for the sake of sharing the love of being alive and human. I’d bury my head in people’s chests and love them and have my arms holding them all the way around. I’d smell people. I’d give people compliments without a second thought. I’d smile at every person. I’d run around and do cartwheels in the streets and let my skirt flip up exposing my underwear! I’d be loud in public! I’d just stand anywhere and throw my head back and HOWL or GROWL at the sky with every ounce of my being. Skinned knees and painted toes with jewels around my neck.

Being a bad girl means breaking boundaries. Break my own. Breaking my conditions. Stepping outside of safe zones. What am i currently afraid of? Let’s be fucking honest with myself. …I have a list, but I’m afraid to post it here. Possibilities of greatness exist in our minds. But…what would people think? …
*
I once wrote a line in a poem – I was born thinking this could be great, but it seems too much.
*
I haven’t yet hugged a stranger or randomly smelled anyone in the street. Thank goodness, one might say. But gosh – the idea in my head…is so great. The unbounded love, like the two small children I once witnessed meeting in the park. One a boy just over a year old. The other a girl perhaps two years old. And she SQUEALED in delight when she saw him and ran to him. Threw her arms around him, touched his face and spoke to him in her baby language. Touched his hands and looked him in the eye. He looked at her. They were connected with pure truth between them. And just as quickly she left with her mother. A brief moment of joy. And, oh boy, it was exciting!
*
If I were a bad girl, I would look strangers in the eye and smile at them. I would open myself to instantaneous deep connection.
*
These beautiful possibilities of greatness existing in our minds.
*
If I were a bad girl I would live everyday like this:
*
Jogging down a hill
in the storm
I suddenly hoped
to slip, hitting
the ground hard
and sliding down
as I grasped
for a nearby root,
which would instead split
open my hand
causing a frantic smear of blood in the snow.
*
I would continue sliding
to the bottom,
gaining speed,
where I would finally
stop after slamming
into the base
of an old weathered tree,
curled for a bit
before I stood
to examine the blood
pooling in my palm,
with nothing to protect
the wound from
the freezing air
and ice swirling about me.
There would be a moment of nothing
but the sounds of the storm
before I would take
a deep breath
and continue to run
home,
feeling like something
of a warrior
as my heart
beat just a fraction
harder – blood dripping
in a trail of proof.
*
I am home now,
my hand fine.
But this was
a possibility.
And that excited me.
(The Wish, written December 26, 2012).
If I were a bad girl, I’d be fully engaged, with full awareness, in this world of which I am a part. Of this world I want to dance through.
________________________________________________________________________________ 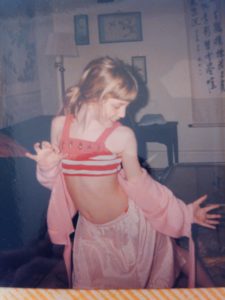