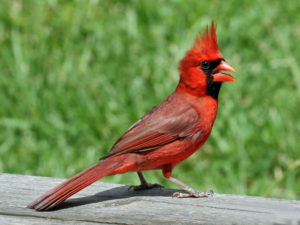 I was feeling particularly uninspired and powerless the other day, looking listlessly out the window, when a cardinal flew onto my fire escape, looked right at me, flared his crest and then flew away.
I am a firm believer that our spirit (or unconscious) focuses on certain animals when we need a pep talk, or sometimes a kick in butt and I promptly looked up the spiritual meaning of a Cardinal. It was:

Whhoooo shivers. Trust and ownership can be quite a challenge!!

Interview Excerpt from HUMAN, a film by Yann Arthus-Bertrand

“World’s Poorest President Explains Why We Should Kick Rich People Out Of Politics” (Source: OccupyWallStreet.net)